Good news from Myanmar: International animal welfare organisation FOUR PAWS has managed to vaccinate over 30,000 dogs and cats against rabies in 220 villages around the capital Naypyidaw, in just four weeks. Thus, the area, which is three times as big as Singapore, is considered as rabies-free. In the second phase of the ambitious pilot project, the 40-headed team, including local and international veterinarians and organisations, will vaccinate another 20,000 animals in the ancient city of Bagan.

After a brief break due to Myanmar's New Year celebration, FOUR PAWS will enter the next phase of its mass vaccination campaign "Don’t wait vaccinate – Together we save lives" on 28th April 2018. "When we started our work in Myanmar at the beginning of March, it seemed impossible to make so much progress that quickly. Besides the unbearable heat, our team has faced many cultural and logistical obstacles. The fact that we have already vaccinated over 30,000 animals against rabies proves that nothing is impossible. We are now looking forward to working with the residents of Bagan. Thanks to the partners in Myanmar, we will soon reach our target of 50,000 vaccinated animals," says FOUR PAWS veterinarian and head of the project Dr Amir Khalil.

Life of humans and animals in danger

According to the World Health Organisation (WHO) and Myanmar’s Livestock Breeding and Veterinary Department, nearly 62,000 people were bitten by dogs in 2017 – forty percent of whom were children under the age of fifteen. About 1,000 of these bites resulted in deaths due to rabies infections. Residents and authorities often kill the animals brutally due to fear of rabies, these incidents become more frequent in the summer months. "The misconception that dogs are particularly aggressive when it is hot is unfortunately widespread in Myanmar. Therefore, our task is not only to vaccinate the animals, but also to educate people about rabies. We take the fears and worries of the residents very seriously. After all, rabies is a real threat in Myanmar,” explains Dr Marina Ivanova, a FOUR PAWS vet, who has joined the project team on-site.

FOUR PAWS’ pilot project reinforces Myanmar's and WHO’s plans to eradicate rabies by 2030. This is by no means an easy mission – according to Myanmar’s Livestock Breeding and Veterinary Department, there are an estimated four million dogs in the country. The Livestock Breeding and Veterinary Department, volunteers of Blue Cross as well as the local NGO “Mingalar Myanmar” support FOUR PAWS’ mission. In total, around forty people are active on-site. FOUR PAWS trained the local teams in terms of sustainable rabies prevention, proper handling of strays and safe dog catching techniques. Additionally, visits to the affected communities and the ongoing public FOUR PAWS campaign have already created a heightened awareness in the region.

“Animals Have Been Victims for Far Too Long” 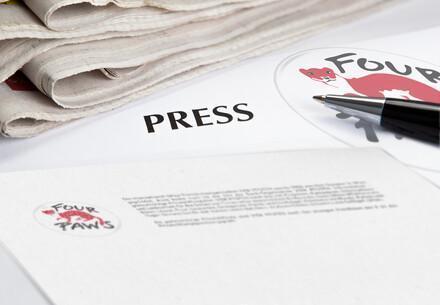