London 9June 2022 – Since 2018, global animal welfare organisation FOUR PAWS has been offering Animal Assisted Intervention (AAI) in Ukraine and now the project is working with soldiers returning from the war. The programme sees former stray dogs selected, trained and certified by experts to become therapy dogs.

It was originally created to change the way people perceive and treat stray animals. Now therapy dog Busia is also providing emotional support and PTSD (post-traumatic stress disorder) prevention to servicemen of the Armed Forces of Ukraine who received injuries and are currently in the hospital in Vinnytsia in central Ukraine.

Psychologists note that other methods of rehabilitation are faster and more visible in those veterans who also work with dog therapists. Therefore, the AAI experts from FOUR PAWS, who have been visiting displaced people from the east of the country in Vinnytsia since the beginning of the war, decided to support injured soldiers.

The dog acts as a guide between the psychologist and the patient, creating a trusting, relaxing atmosphere. When patients feel safe with the dog, they open up.

“The main task of our work is to support and assist with the rehabilitation of the patients after they were exposed to hostilities, rescue operations, or were injured, in order to prevent PTSD (post-traumatic stress disorder).

“If patients want to communicate but find it hard to do, in many cases it is easier with a dog than a human. Often we come to the hospital and notice that a person who hasn't talked to anyone starts interacting with the dog after a short time,” says Viktoriia Habryk, the Practical Psychologist at FOUR PAWS who works with Busia and the soldiers.

Canine therapy can be effective to address stress, depression, crises, aggression, and hyperactivity. Interaction with the dog has also been known to help with social development, relieve anxiety, calm and relax the patients.

After the success of Lisa, Ukraine's first former stray AAI dog who has since retired, the FOUR PAWS team in Ukraine was ready to rescue and train another dog for the project.

They found what they were looking for in Busia, a former stray dog from Lviv who passed all tests with flying colours and became the second former stray dog in Ukraine to participate in AAI.

“Busia provides valuable therapeutic support. In our AAI programme, she was specially trained to respond to human reactions and very clearly identifies people who are tense, stressed or traumatised.

“She can bring a person out of such a state by licking their hands or touching them with her paw, which invites them to interact. The patients begin to pet her, hug her, and gradually calm down. Busia does not judge or evaluate, she gives unconditional love and comfort.” says Habryk. 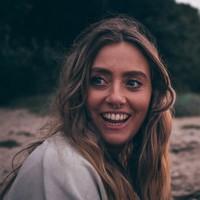