Arosa Bear Sanctuary in Switzerland is the first Swiss bear sanctuary and opened to the public in August 2018.

The bears are surrounded by mountain views, with lots of space to roam and two pools to take a dip in – it’s the perfect place for rescued bears to recover and live out their lives happily.

We hear from Jo who joined FOUR PAWS UK last year as part of the Fundraising team.

My amazing role at FOUR PAWS UK involves sharing our bear rescue stories with supporters so seeing the bears was something I was really keen to do. After booking a few days off, I was soon heading to Switzerland to visit Arosa Bear Sanctuary. I was so excited!!

After taking the train from Zurich, I arrived in the small picturesque town of Arosa. The following morning, after a delicious vegan breakfast at the hotel, I took the cable car up to the sanctuary. It was time to see those bears!

The first bear I saw was Napa who was strolling around the grass enjoying the fresh mountain air. He then decided to lie down and have a nice long rest in the sun. Looking out at the forests and snow topped mountains who could blame him? He looked so happy and content. It was a far cry from his past where he was forced to perform tricks in a circus.

Napa is not alone at Arosa, he shares his home with two other bears, Amelia and Meimo, who we rescued from terrible conditions at a private zoo in Albania. They were indoors when I was there and even though I waited for what seemed like hours hoping to see them, they decided to stay put and enjoy some downtime inside.

Seeing our rescued bears was a wonderful experience and it made me immensely proud of the work we do.

If you’d like to see first-hand, how your support is making a difference, I’d highly recommend visiting a FOUR PAWS sanctuary!

Find out more about Arosa Sanctuary and plan your visit here! 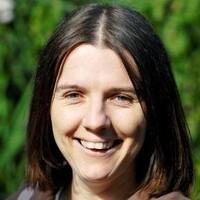