Hello and welcome to our first FOUR PAWS UK blog update! We’re really excited to inform you about some of the exciting things we’re working on in the UK. There’s a lot of work to be done, but we have a super strong team here who are extremely dedicated to making the world a better place for animals!

In our first update, we would like to introduce you to some of our UK team who will be bringing you future updates about the exciting things we are working on!

'Since childhood, I have been passionate about animals and the natural world.  From walking the dog in the  countryside or looking after our family of chickens, to watching David Attenborough on the tele and reading Gerald Durrell’s crazy tales in My family, and other animals – I have been enamoured with all things wildlife and knew straight away that I wanted to do all I could to help protect them. '

'My favourite animal would have to be the elephant. My whole life I have been amazed at these gentle giants, with their cleverness, playfulness and strong family bonds – I guess in a way I related to them on that level especially. My childhood was littered with elephant ornaments, jewellery, stuffed toys and books, and now as an adult I have the pleasure of being able to dedicate my life to helping endangered species just like them from the devastating impact that humans have on their lives and habitats.'

'I’ve always been an animal lover. I grew with dogs and cats and also tried to adopt a wild family too in the form of Lizzie the Lizard (sadly her tail didn’t survive the numerous attacks by the cats ☹) and a family of toads. When at school I had aspirations of being an oceanographer, but sadly realised that my forte lay in communications as appose to science. But this passion has seen me spend most of my professional life working to raise awareness of the charities in the UK and the work we can do to help our animal friends at home and further afield.'

'Despite seeing so many beautiful animals whilst in Tanzania last year, I think dogs remain my favourite. There is nothing like the greeting from a dog whether you’ve been away for two minutes or two hours. My mum has two rescue dogs and it’s been such an amazing experience getting to know them and learn about their mannerisms. With over a million dogs in the UK it seems I’m not alone in loving these canine chums, but with so many entering rescue centres through no fault of their own, there is still much more education needed about where to source a dog and what an undertaking, and luxury, it is to own one.'

'Since a very young age, I've always wanted to do something to help animals. I remember writing a letter to the Prime Minister in primary school demanding a ban on fox hunting in the UK (thankfully this has since been passed). Shortly after this, I held my own RSPCA fundraiser at school because I felt so terrible about a beautiful badger who had been hit by a car lying at the side of a road on my walk to school. At age 11, I began to learn about the cruel realities the vast majority of farm animals endure, and became vegetarian and then later vegan. It was then that my passion grew even more and I became determined to be a voice for those who cannot speak for themselves.'

'I have a hard time choosing between pigs and cows - they are both my favourites! Cows are just like big dogs, and there is nothing more satisfying than watching a huge cow jump around with excitement. I have always had a special love for pigs ever since watching 'Babe' as a child. Pigs always intrigue me, Winston Churchill once said: 'I am fond of pigs. Dogs look up to us. Cats look down on us. Pigs treat us as equals.' They are incredibly intelligent animals with an amazing sense of smell and are also very clean - the reason they are known for playing around in mud is because they do not have sweat glands, and so there is nothing better for them then a mud bath to cool down! My favourite thing is to hang out with pigs and cows at farm sanctuaries - where they are free to live out the rest of their days in peace.'

'Like so many people, I grew up with several rescued dogs and cats. In my early career, I worked in international development in Asia and Africa and while focusing on helping people with a raw deal in life, I was so often distressed at the animals getting an even rawer one and sometimes stepped in where I could. And while working as a videographer a few years back, I had the opportunity to film inside an animal shelter in Lisbon. Shortly after, I decided I wanted to help animals, that don’t have a voice in our world, full-time. This took me to Battersea Dogs and Cats Home and eventually to FOUR PAWS. I may not physically deal with animals every day in my job, but I do see the positive impacts we make for animals, either on the individual level through our international rescues or the group level through campaigning for a better deal for animals, both here in the UK and abroad. Contributing to that impact and seeing positive change happen is what makes the job so worthwhile but there is always so much more to be done. Sadly, it will be a long time before organisations like ours can say we are no longer needed.'

'That’s such a tough question! In the wild, I’m fascinated by so many species but big cats are pretty amazing to me and I love elephants too. And closer to home, while I absolutely love dogs, I have a cat which is easier to look after with a job that takes me away from home every day. We found her as a stray kitten near an old flat I used to live in and she has been with me and my partner for the last 16 years!'

Keep an eye on our website for our next UK update coming soon... 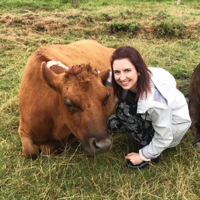