DonateShop
FOUR PAWS in the UK Our StoriesBlog & NewsA trophy hunting import ban is finally on the Parliamentary agenda!

Back in 2015, the world was rocked by the tragic death of Cecil the lion at the hands of an American dentist, turned trophy hunter.

Cecil was the majestic head of two prides in Hwange National Park in Zimbabwe, and a vital part of an ongoing conservation research project. However, this did not stop Walter Palmer from luring Cecil outside the safety of the National Park with an elephant carcass as bait.

Palmer shot Cecil with a bow and arrow, mortally wounding but not instantly killing him. Cecil suffered for another nine hours at least before he was finally put out of his misery, and his GPS collar destroyed to cover up this heinous act.

Seven years have passed, and stories like Cecil’s persist to make headlines. At least 60 lions have been killed by British trophy hunters since Cecil’s death, and despite numerous Government manifesto commitments dating as far back as 2019 promising to ban the import of hunting trophies from endangered species, we are still awaiting a ban.

Are we any closer to stopping hunting trophies entering the UK?

On 15 June we were thrilled to see Henry Smith MP for Crawley table a Government backed Private Member’s Bill, the Hunting Trophies (Import Prohibition) Bill. This long-awaited legislation is set to be world-leading, encompassing over 1,000 species classed as endangered or threatened in accordance with the International Union for Conservation of Nature (IUCN) Red List.

“Trophy hunting is barbaric and something the British public rightly finds repugnant. This Bill is supported by the Government and by opposition MPs alike and will put an end to these horrendous activities.”

To rally government support for the Bill, the All-Party Parliamentary Group on Banning Trophy Hunting launched their new report, Trophy Hunting & Britain: The Case for a Ban, alongside a star-studded event in Parliament on 29 June.

As a member of the Campaign to Ban Trophy Hunting coalition, FOUR PAWS UK attended in support of this vital Bill, which is due to have its Second Reading on 25 November 2022.

It is crucial that Henry Smith MP’s Private Members Bill passes through Parliament unattested and unamended. Please sign up to stay up to date with the campaign, as soon we will be asking you to help lions just like Cecil  by calling on your MP to support the safe passage of the Hunting Trophies (Import Prohibition) Bill through the Houses of Parliament and on to our statute books. 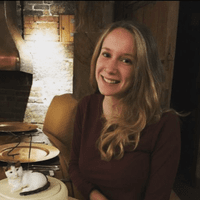 Daisy works in the Campaigns Team at FOUR PAWS UK, supporting her colleagues in the delivery of our wild, farm and companion animal campaigns. She has a background in animal behaviour and welfare and has almost a decade’s worth of experience working with sanctuaries and wildlife rehabilitation centres.