To celebrate the launch of our new TV advert we wanted to tell you a little bit more about why we do this and the story behind some of the big cats featured.

Sadly in recent years we have seen heart-breaking cases of lions and tigers that are literally wasting away. Thankfully we have been able to help many of these but we know there are many more that need our help. Right now for example our teams are working in Sudan to help Mansour, Kandaka two other lions and three hyenas who were suffering due to the lack of supplies in Sudan.

Whilst the Sudanese lions are not featured in this advert other big cats that we’ve rescued are. One of these is Ivan-Asen who was rescued from a zoo in Bulgaria and now lives in our specialist sanctuary in the Netherlands called Felida with four lions (two of which are believed to be his siblings) and a tiger. Ivan-Asen was in very poor health when the team first met him in 2017 but thankfully this three-year-old responded well and has continued to grow in strength ever since.

As a charity FOUR PAWS UK relies on supporter donations and regularly uses daytime TV advertising (9am – 5pm) to raise awareness of the life-saving missions and rescues that the teams undertake around the world. 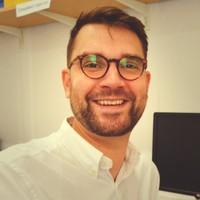 Martin oversees all aspects of fundraising at FOUR PAWS, including our new TV advert. Martin brings 15 years of experience in the charity sector and has two rescue cats.