While Vietnam’s brutal dog meat trade is fairly well known, cats tend to be forgotten victims of an equally sinister trade. In recent years, there has been a surge in the number of restaurants in Vietnam serving a dish known as 'Little Tiger' or thịt mèo (Vietnamese for cat meat). Many people believe that cat meat brings good luck, has medicinal properties, and wards off evil. It is estimated that up to a million cats, many of them cherished pets, fall victim to this trade every year. In order to meet the demand for cat meat, both stray and pet cats are routinely trapped or stolen using snares, crammed tightly into wire cages, and trafficked throughout the country to supply cat meat restaurants and markets. The suffering of these cats is immense, from capture to slaughter, in which many are drowned, beaten to death, or de-furred while still alive.

With FOUR PAWS support, Vietnam’s 'Cats Matter Too' program is the first of its kind in Vietnam to specifically focus on promoting feline welfare while also targeting the cat meat trade.

Further fueling the trade is the country’s lack of available low-cost spay/neuter opportunities and humane management options for free-roaming and pet cats. This leads to the birth unwanted litters of kittens and puppies that often end up in the meat trade. Central Vietnam is a particularly popular area for stealing cats which are then trafficked throughout the country.

FOUR PAWS and local groups PAWS for Compassion and Vietnam Cat Welfare have launched the 'Cats Matter Too' program, focused on raising local awareness of this issue, keeping cats safe, offering free spay/neuter services to pet owners and local businesses, and rescuing cats in need.  The program also involves ongoing workshops at local schools to impart a message of compassion towards all animals.

In December, we conducted a desperately needed mobile spay/neuter clinic in the area of Tam Ky, Vietnam, with our partner PAWS for Compassion.

We managed to vaccinate and sterilize over 50 cats and dogs. Furthermore we provided training to several young veterinary nurses. In 2020 we hope to provide additional clinics throughout the area, given the lack of spay/neuter and veterinary accessibility. 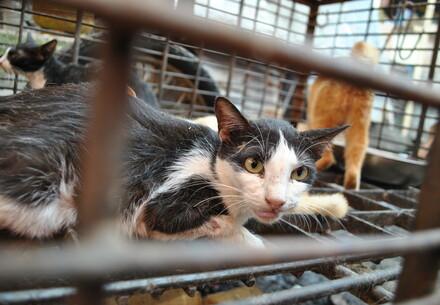 Cats are victims of the a sinister trade